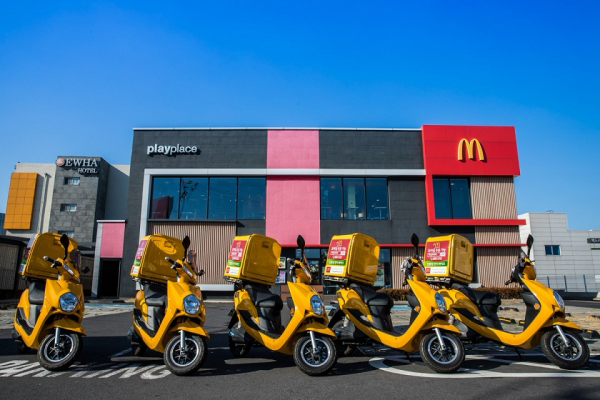 McDonald’s Korea has set out to replace all of its delivery vehicles with electric bikes by 2021 as part of the Scale for Good campaign, a group-wide initiative to take action on climate change.

The Korean unit of the fast-food giant said Tuesday it plans to swap more than 1,400 delivery bikes for electric versions over the next three years. It already started making the shift last year when it changed all 40 bikes at its restaurants on Jeju Island.

An electric bike can save 669 kilograms of greenhouse gas emissions per year compared to its non-electric counterpart, according to the company. Once McDonald`s plan is fully realized, it would have the effect of reducing 937 metric tons of carbon dioxide, equivalent to planting 87,000 trees.

McDonald’s launched its Scale for Good campaign worldwide in March 2018, becoming the first restaurant company in the world to set a scientifically-based target to significantly reduce carbon emissions.

The company aims to cut greenhouse gas emissions related to McDonald’s restaurants and offices by 36 percent from 2015 levels by the year 2030.

It has also committed to a 31 percent reduction in emissions intensity across its supply chain by the same year. Through these actions, it expects to prevent 150 million metric tons of global emissions, equal to taking 32 million passenger cars off the roads for an entire year.

By Kang Da-young and Kim Hyo-jin